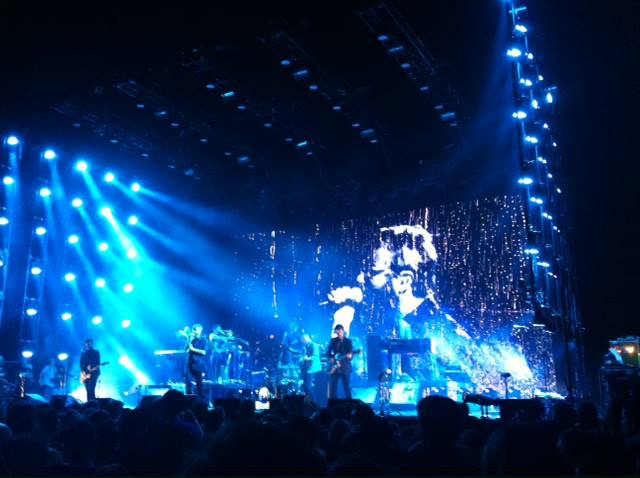 I had my doubts about The National being able to connect with their audience with the same intensity in an arena setting after spending years playing in small and medium-sized venues. But they not only connected with the fans and put on a brilliant performance, they also felt completely right at home at Barclays Center. Maybe it's a Brooklyn thing.

In true National form, the band played a ton of songs from their new album, Trouble Will Find Me. Ten of the tracks in total. The new album sounds very good live, but it's generally a very mellow record by National standards. So there's not a single song that carries the same level of energy as a "Mr. November", an "Abel" or a "Mistaken for Strangers." That said, I think there are at least 2 or 3 songs that will become regulars on future tours. "Demons" and "I Need My Girl", for sure.

Musically speaking, some of the highlights included "England", which just kicked total ass with its epic build-up and rich horn arrangements. ""About Today" off Cherry Tree was magnificent and an excellent addition to their live material. "Fake Empire" was slightly disappointing. I felt the crescendo at the end was a little too sudden and could've used a little more build-up. The best stretch, in my opinion, was an impressive foursome, featuring "Afraid of Everyone", "Conversation 16", "Squalor Victoria" and "I Need My Girl."

But the two individual highlights for me were in the encore: "Mr. November" with Matt Berninger stepping off the stage to sing on the floor and an acoustic version of "Vanderlyle Crybaby Geeks",  a perfect closer for the evening.

While I wish The National still played in smaller venues, I was overly impressed with their show at Barclays Center. Can't wait to see these guys again.