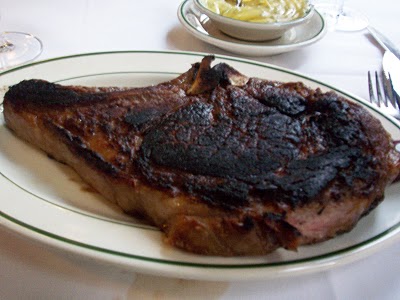 I consider myself to be a steak lover. Yet, it took 14 years of living in New York City to finally take the pilgrimage to Smith and Wollensky. Part of the reason for the delay is that I'm a cheapo. While I love steak, it's hard for me to justify spending $40-50 for a steak a la carte. Fortunately, someone else foot the bill this time around.

I should start by saying that the photo was not taken by me, since both my friend and I had phones whose batteries were on the verge of dying. So I found a photo of the bone-in ribeye from Beef Aficionado. That's what I ordered at SW. They call it the Colorado Ribeye there. Eating it helped me to confirm my taste for steak. I thought the steak was very good, but it wasn't my favorite. That's because I'm not a big fan of the aged flavor aftertaste. I like my steaks pretty straight up. Hence, I've actually enjoyed my steaks at Sparks and Del Frisco more than at SW or Peter Luger. Don't get me wrong. SW makes an awesome ribeye. I would just prefer less aged meat. But they cook it just right. Charred and crispy on the outside. Juicy, red, and buttery on the inside.

SW's sides were very impressive. The hashbrowns - shaped into small cubes that stick together - were phenomenal, and the creamed spinach was really good as well. For appetizers, we had the shrimp cocktail and Maryland crab cakes. Both were good, but nothing extraordinary. Same with the carrot cake dessert. I would've liked to see more moist buttery goodness, but the size was impressive. Almost a steak in itself. Normally I take red wine with my steak, but my compatriot and I settled for Rogue Brewery's Irish Red Ale, which I thought actually worked really well with the ribeye.

I think SW is a good steakhouse option for those who love Peter Luger. I'm sure most people think that Peter Luger is light years ahead of SW. But my point is that if you like that aged flavor aftertaste which Peter Luger is known for, I think SW will be right up your alley.
Labels: Midtown Restaurant reviews Smith and Wollensky Steak