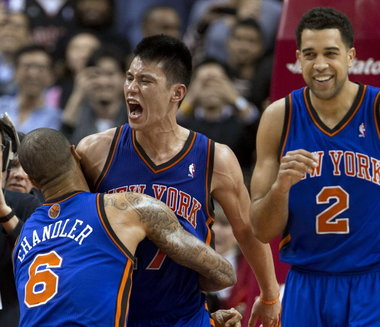 The Knicks are a team again.


They haven't been one for a while. We've brought in a couple of superstars recently, but we lacked role players, depth, and the ever-underrated team chemistry. That's all changed. It's almost like a miracle. While I've enjoyed every minute of the Linsanity - watching his immense talent on the floor and seeing how he conducts himself with remarkable humility - I've been most impressed by how this team is coming together under his leadership, now playoff bound - and perhaps even more following the defeat of the NBA's defending champion Mavs on Sunday.

We love a good underdog story. We love miracles. We eat that stuff up. But what I've found interesting is how Lin's humility and selfless character are just as appealing to us - if not more. In Lin, we see someone who deflects the attention off himself and points it right back at you - whether you're a teammate, a coach, a fan, a friend or relative, an opponent, or God. Jeremy Lin's story is amazing to us because of the fact that he sees so much more to the story than just himself.
Labels: Basketball Jeremy Lin New York Knicks