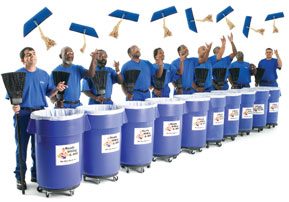 Working in the Development department at The Doe Fund, I think it's easy to lose sight of why I took this job in the first place. I can write dozens of grant proposals and reports, but if I'm not regularly going out to the program (my group is in a separate office space) and talking with the guys in the program, I tend to forget what's really going on here.

Last night another class of the men in blue graduated from The Doe Fund's Ready, Willing & Able. I remember sleeping through my own graduation at BC's Alumni Stadium. But last night's ceremony was much different. These guys were once homeless. Most of them have histories of incarceration and addiction. And now they're proving everyone wrong about who they want to be and who they've already become. All the grads now have jobs, their own housing and they're drug- and alcohol-free. True to the adage, men are taught how to fish here. It's pretty awesome.

I've come to appreciate the unthinkable, because the unthinkable happens pretty often around here. Three stories, in particular, come to mind. Before he started The Doe Fund, our co-founder, George McDonald (his wife is the other founder), would hand out sandwiches to the homeless living in Grand Central station. This was back in the 80's. George got arrested a few times for doing that. It turned out that the guy who arrested George would later end up working for The Doe Fund, as the Director of Security. And he's still here. It blows my mind. The handcuffs that the former cop used to secure George on Christmas Eve 1989, along with his police badge, are hanging on a wall just steps away from my desk. I imagine it helps remind George quite vividly how far things have come along.

Another favorite story of mine is about one of our graduates. Before he stepped foot into The Doe Fund, he was imprisoned several times for theft and breaking and entering. He busted locks to take stuff that wasn't his. That's basically what he did for a living. But he got a chance here to turn things around for himself. To live life right, and to earn an honest living. He worked hard, he swept the streets while in our program, took up vocational training, and then got a job after completing Ready, Willing & Able. Now he's a locksmith, fixing things he once destroyed. Unthinkable.

But I think this one is tops. Last night, George shared with the graduates and attendees that a family had traveled all the way from Miami unannounced to celebrate with one of their relatives who was graduating that evening. They traveled over a thousand miles to be there. But the bigger deal was that the family and the grad had not been in contact for many years. A lot of times, the guys in our program come from broken and estranged families. George called up the graduate and the family onto the stage to meet, for the first time in years. They embraced, and everyone rose to their feet. This morning, George told me what it was like standing there, because he was there right next to them when they were hugging each other. It must've been something, because I was already pretty emotional standing from about 50 yards away from the stage. The unlikeliest of families can reunite given the right circumstance.

Even if it's just for a season, it's these kinds of redemption stories that help me remember why I'm here.
Labels: Graduation Homelessness Redemption The Doe Fund

Cliff said…
Recovery in action coupled with people who understand the basic human desire to be self sufficient. Add to that the self-actualization that occurs when one (whether the helper or one being helped) has as his or her goal the greater good rather than individual acclaim and accomplishment.
March 28, 2009 at 9:17 AM

Elaina said…
hi bro! i'm emotional reading about this family's reunion and i wasn't even there. you know what my life has consisted of these past 3 weeks with the little guy... never-ending feeding time. :) thanks for putting things in perspective.
April 21, 2009 at 12:52 AM