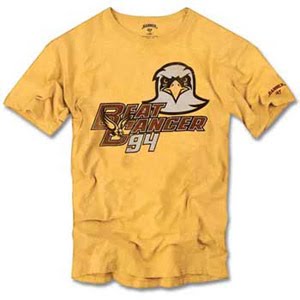 ESPN's College GameDay doesn't come to BC very often. So when it does, it's a pretty big deal. Today, the GameDay crew set up shop at our campus for the BC-Florida State game. Not a huge match up at all. But the producers were keen on telling the story of BC's star linebacker, Mark Herzlich. As I mentioned in a previous post, Herzy was diagnosed with Ewing's Sarcoma, a rare form of cancer in the bones. After months of chemo and radiation, Herzy's doctor said this past week that he was 99% sure that the cancer was completely gone.

The BC community has been following his recovery progress pretty closely, as well as the rest of the ACC. But it was touching to hear stories of other supporters from around the country who were featured on GameDay. One of them was Lance Armstrong. In a brief video segment, Lance Armstrong showed his support to Herzy. He said that he was glad that this weekend BC stood for Beat Cancer, not Boston College. BC has been selling "Beat Cancer" tee-shirts to raise funds for cancer research. It was an inspiring GameDay, probably more so for me as an alum. Of course, beating Florida State was sweet as well.

Today Carol and I also caught the Michigan game (her alma mater) vs. Mich State at one of the NYC Alumni Club's game watches. If you haven't been to a game watch, you definitely should. It's one of the most fun ways to watch a college game. It was great seeing Michigan alums of all ages cheering together for the Wolverines. Today was a tough loss in overtime, but I did get my first Michigan tee-shirt from it. So it wasn't a complete loss.