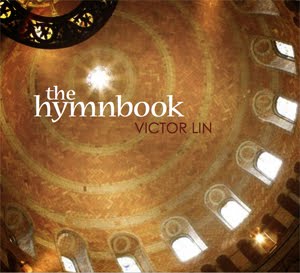 For quite a while I've known God to touch souls through music. I've experienced it myself plenty of times - and many of those instances came through the live and recorded performances of Victor Lin. I first met Victor at my church, maybe four or five years ago, and soon after witnessed the incredible gift God gave him for performing music. I've come to realize that he's not just a talented musician, he is in his own way an instrument being played by God Himself. Tonight he played again, and again God was moving in my soul.

Last year, Victor released a CD called "The Hymnbook", a collection of jazz interpretations for Christian hymns. I grew up hearing - and on occasion, singing - those same hymns in church. Those songs never meant much to me when I was a kid. But now - as an adult and having personally chosen to live this faith - the lyrics and themes of the hymns are so much more profound and are a source of assurance. Several times during the past year I've played "The Hymnbook" on my iPod, and it would minister to me in way that a monster guitar riff from Jimmy Page couldn't. Ironically it spoke to me deeply - even without the words to the hymns. I'm thankful that this album exists. But like many artists, hearing Victor Lin play live is a whole other experience. It's like music loses something on its way through people's headphones. And sometimes people - along with their souls - need to be reminded of the power of live music.