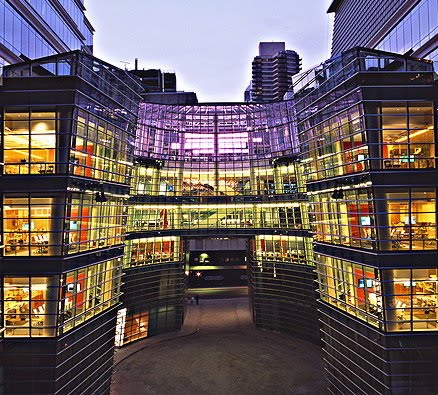 I had a meeting today at Bloomberg L.P. It was the most beautiful office space I've ever seen, infinitely more impressive than any ad agency I've ever stepped foot in. When I stepped out of the elevator on the 6th floor, I think my jaw dropped back down to the lobby. The outside is pretty nice as you can see in the photo, courtesy of a little site called Facebook. But it's the inside that really makes you weak in the knees. The building is nearly all glass, which gives the space an open feel. There are super-high ceilings, courtyards, atriums, and a very impressive food/pantry where everything is free. Free grub and aesthetics aside, I think what makes the office so great is its green practices. There's hardly any paper lying around, and we were asked not to bring any printouts, but instead to email all documents beforehand. The files were viewed on a flatscreen in what appeared to be just one of dozens of conference rooms named after various cities. Since the wall-to-wall windows and glass ceilings let in so much sun, the office also saves a few light bulbs here and there. Good going, Mike.
Labels: Bloomberg L.P. Green practices Midtown