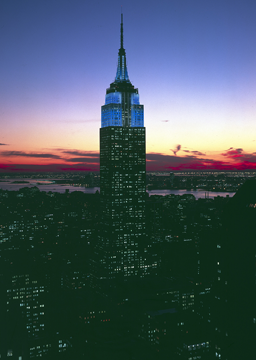 Yesterday I strolled home from The Doe Fund's annual gala at Cipriani, reflecting on the night. I was filled with immense pride for being a part of such an incredible mission. Ten blocks away from the Gala stood the Empire State Building in Doe Fund blue.

Even though I've lived in this city for years and the "men in blue" of Ready, Willing & Able have been here as long as I have, I didn't actually know about The Doe Fund until five years ago. I was with some peeps from Vision Church outside passing out sandwiches to homeless people and trying to strike up conversations with them. We figured they were starving for company too. That night a guy from my church, David Hsin, told me about The Doe Fund and how they provide jobs and training to help homeless guys get out of homelessness instead of perpetuating the problem. I went home that night and went on their website and read about their programs. About a year later, I went on idealist.org and saw a posting for a grant writer position. I sent them a totally revamped resume, interviewed with a couple of staff from their development department, and I got the job.

I still can't believe it's been over three years now. I think one of the best parts of the job is talking with the trainees and witnessing their amazing perseverance in turning their lives around. It is moving. It has given me so much inspiration for my own life. I think Ethan Hawke, the gala's honoree and a big Doe Fund supporter, was really onto something in his gala remarks. He said something about how community is about serving one another, and that the "men in blue" are serving this city. Not the other way around. They do an excellent job cleaning our streets. But I think the biggest way these guys serve us is by inspiring us, reminding cynical New Yorkers that anything is possible.
Labels: Cipriani Empire State Building Ethan Hawke Homelessness The Doe Fund Vision Church