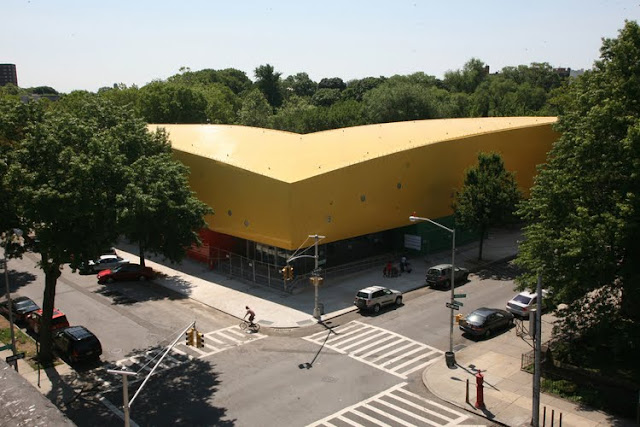 Carol, Sophia and I met up with some of the Meet Up families at the Brooklyn Children's Museum today. Carol's friend May was already there with her family when we got out of the subway. She texted Carol to tell her to look out for the building with the yellow roof. By roof I believe she meant the entire exterior. It stood out like a sore thumb in a residential section of Crown Heights. We were struck by how eerily quiet it was walking to the museum from the subway stop. But once we got inside, it was like stepping through the other side of a bookcase into a secret romper room. The museum has a good number of exhibits, play areas, and special programs.

Parenthood has definitely opened our eyes to a different side of New York City. There's a culture here that tries to entice you as a parent to stay in the city and raise your kids here. Counterattacking these efforts is the lack of space in schools. Sophia is still too young for us to be dealing with the absurdities, but there are actually several neighborhoods in the city where public schools - particularly with pre-K and Kindergarten - have no room. Can't wait to deal with that.
Labels: Brooklyn Brooklyn Children's Museum Crown Heights