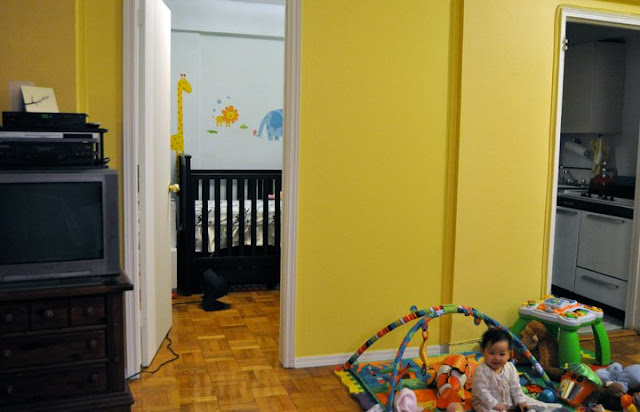 New Yorkers are good at putting up walls. Particularly the pressurized variety. I'm not sure if pressurized walls are common in other cities, but it's certainly been a big part of the apartment living landscape in New York City for several years now. If you don't know what it is, pressurized walls are held up with metal frames. Everything else - including the sheet rock, sound proofing materials, and molding are screwed in or nailed into the metal frame. So the adjacent walls and ceiling don't have any screws, nails or glues on them. Supposedly this approach makes it easy to take the wall down without causing any damage to the existing walls and ceiling around it. Carol and I decided to give it a shot. And it worked well as you can see in the photo above. The wall was pretty simple. We just converted an alcove space in our studio into a nursery room for Sophia. While it's definitely a benefit for Sophia to finally have her own room, it's more of a benefit for us because now we finally have some privacy. We also can stop whispering to each other now, and we can unmute the television finally. This ended up saving us a lot of money and time. Instead of looking for a bigger space to rent, we were able to stay put and reconfigure our existing arrangements.

The company we ended up using was Wall2Wall. At first I was very hesitant to go with them because we didn't know anybody else personally who used them. They also didn't have any reviews (not even on Yelp), only a couple of generic testimonials that were on their website. But in the end, two things separated them from the rest of the companies: 1) they use eco-friendly sound proofing materials, which is very important to us, and 2) they said that we didn't have to pay until the job was finished. Overall, we were very satisfied with the work, and I'd recommend them if you're looking for a good pressurized wall company.
Labels: Carol Pressurized walls Sophia Wall2Wall

carollai said…
yes. we were fearful of wall2wall ny because of the 2 1star reviews we did find. but we talked to the owner, eddie, numerous times and decided to take a step of faith. i'm glad we did. :)
February 2, 2011 at 10:59 PM

I’m writing on behalf of the visual editor for HouseLogic.com to request your permission to use one of your photos on the site. The photo nicely illustrates a topic we’re writing about. HouseLogic, published by the National Association of Realtors®, covers home ownership-related topics.

Specifically, we’d like your permission to use the image http://4.bp.blogspot.com/_XxNYYPoC18E/TUofOxSU22I/AAAAAAAAAl4/AXk1H5Tfrkk/s640/180463_10150383122600554_537150553_16930880_3015087_n.jpg in connection with the slideshow about temporary walls. The image may also appear as a link back to that slideshow in such places as our email newsletter; social media, including Pinterest; marketing; companion site for REALTORS®; and website home page. The use may require that we resize the image to fit the size constraints of our website.

Additionally, we would like to request a high-res version of the image, at least 1200 x 800 pixels.

We’re asking you to grant the National Association the non-exclusive, royalty-free right to use the image as described above for as long as the topic is included on the HouseLogic site. We would include a credit to you in the caption accompanying the image in its primary location on HouseLogic. If you would like we could also link that credit to your website.

If you approve, please respond to this email confirming that you own the image rights, have the authority to grant to the National Association permission to use the image as described, and grant that permission. Please also let us know how you would prefer to be named in the credit. My deadline is Monday, June 10th at Noon CST, and I would need a response from you before then, if possible.

Please don't hesitate to contact me if you have any questions.