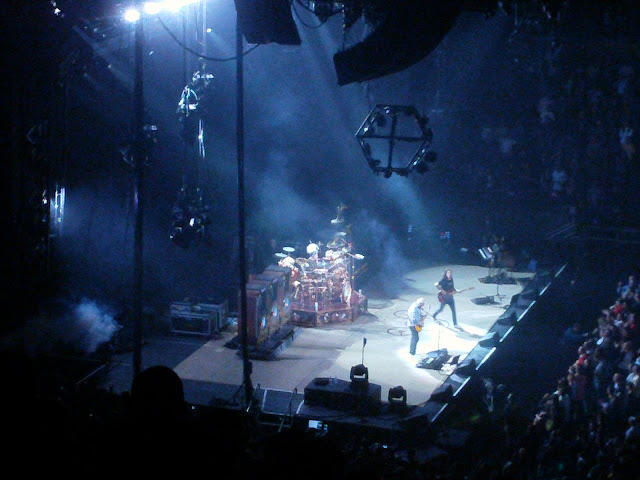 It's been 20 years since I last saw Rush live. That's scary. My first thought was, man, I'm old. My second thought was, man, Rush is older! They were already really old when I saw them in 1991 on the Roll the Bones tour. Now they're the elder statesmen.

The Time Machine tour is impressive. They've been playing the same exact set for dozens of shows, but at least the set works. The time machine motif worked well given Rush's four decades of material to fall back on. I thought that the two highlights were the run through the entire Moving Pictures album from beginning to end and Neil Peart's jaw-dropping drum solo. Come to think of it, there was a lot of jaw-dropping going on that night. The screen behind Peart's massive drum kit revealed several close-ups of the guys, including a few of Geddy Lee's crazy bass solos. I was basically in awe all night at these dinosaurs who were rocking out with the same energy that I saw 20 years ago. It was a treat to see the crowd engage with the band - arms raised - in "The Temples of Syrinx" and I also really enjoyed "Subdivisions" off Signals. In general, I felt the Time Machine setlist could've included more stops around the Signals/Grace Under Pressure/Power Windows era. Would've loved to hear "Red Sector A", "Distant Early Warning", "Territories", and "Mystic Rhythms".

If I had to pick a weakness, there was a period early on in the first set where the time machine went back and forth between 1993 and 2007 a couple of times, and then landed on a song from their forthcoming album. Definitely not Rush's finest years, in my opinion. But overall, I was so impressed with Rush and with the show, and I just felt lucky to be able to catch these prog rock pioneers one more time.

daveed said…
Reminds me of the first (and only) time I saw them in 1990. (I think it was the tour for the previous album.) Amazing technical mastery -- almost too much.

CALVIN LAI said…
Interesting point Daveed. Your observations for the 1990 show made me instinctively think about the Time Machine set list. Set in its ways, with no room for adjustments. Thank God it was a great setlist!
April 18, 2011 at 9:34 PM