HOW TO BEAT HOMELESSNESS ONCE AND FOR ALL 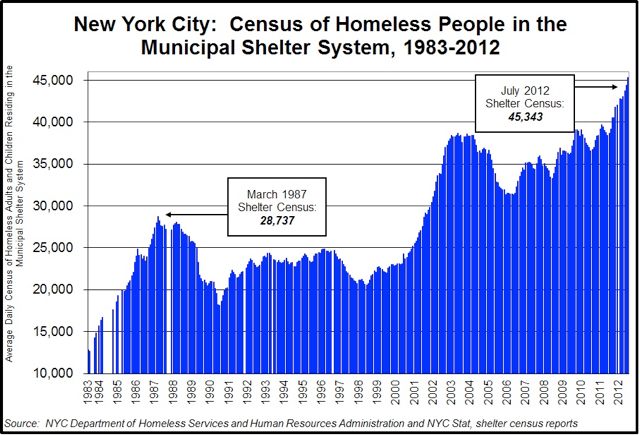 This week, the City announced that they would open five more homeless shelters. It already opened 10 new shelters since May, but that measure hasn't been enough to handle the rising homeless count. 46,000 people live in shelters and thousands more tough it out on the streets or underground. 20,000 of those 46,000 are children. But here's the most depressing stat: over the past year, only 35% of families with kids who applied to stay in city shelters were accepted. Makes you wonder what the remaining 65% are doing tonight.

News sources have been stating that the end of the rent-subsidy program Advantage is largely to blame for the rise in homelessness. The state covered $65 million of this subsidy program (nearly half of the funds), and then pulled out.

So the city has its back against the wall. I don't blame it for opening up more shelters at this point. The situation is awful and we need answers now. But we also need a fundamental shift in how we view solving homelessness. A big reason we got into this problem in the first place seems to be a short-sighted mentality and the reliance on programs like Advantage which can't last forever. It was only a matter of time that the state was going to run out of funds or cut them. So what happens to those families once the subsidies run out?

In my mind, a housing-first approach is only a band-aid solution. It works for a few months, or even a couple of years. But the real solution to homelessness needs to be built around a self-sufficiency mindset. The real solution is work. Providing training, work opportunities, and job placement in the workforce for individuals so they can support themselves and their families.

Yes, easier said than done. But the thing is, it's already being done by The Doe Fund. The approach makes sense. Think about it. Do you continue to throw more money at stop-gap measures, or do you invest in people's lives and give them an opportunity to succeed on their own?
Labels: Homelessness The Doe Fund

pvb said…
Totally agree, Cal. Work builds more than a bank account. Self sufficiency builds self esteem, making us self-empowered.
Think that's part of what makes America the land of opportunity - trying for something better. But we can reach for our dreams only when we have belief in ourselves and our abilities.
Appreciate the post, man.
September 27, 2012 at 10:04 AM

CALVIN LAI said…
Pete, you're totally right on about the self-esteem aspect and all the intangibles that come with having work.
September 27, 2012 at 10:59 AM