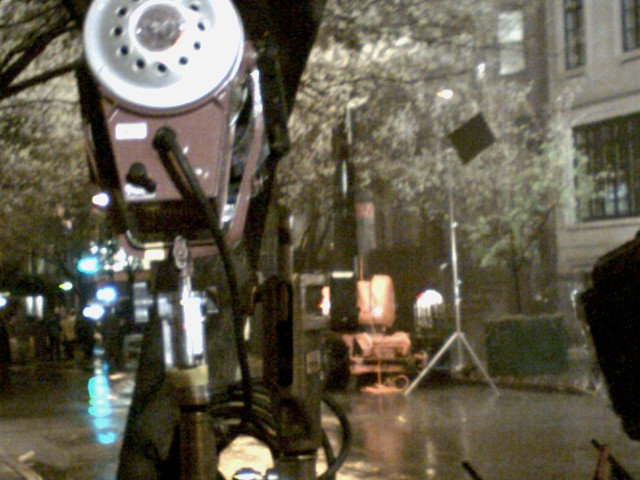 I was walking home from my Mandarin class when I noticed it was raining on 63rd Street between Lexington and Third Avenues. There was a film shoot going on. And the scene called on a giant hose to turn Tuesday night in Manhattan into a wet one. The movie being shot was "Did You Hear About the Morgan's?", with Sarah Jessica Parker and Hugh Grant. I decided to watch and see if any of the actors would turn up. I waited a couple of minutes and then left after a production assistant told me the scene was for a stunt double. A large container of Chinese takeout took priority.

Living in Manhattan you'll accidentally come across your fair share of film and television shoots. But more often than not, you're waiting for the camera to roll. You'll see lots of crew and equipment. But seeing stars is less common. When I was living in Hells Kitchen, I saw dozens of shoots for Law & Order. I used to tell people, if there's a shady scene that needs to be shot outdoors - like a murder or an arrest - it probably will get shot in my neighborhood. I took pride in that actually. Trucks often lined my block, and crews would gulp down coffee on my corner. But one day, I actually saw a lead actor getting ready for his shoot: Ben Affleck in Daredevil. Dozens of pedestrians, including myself, stopped and watched for several minutes. The camera wasn't even rolling. Big deal. Ben Affleck. I liked "Goodwill Hunting" a lot, but I remember feeling slightly lame that I was standing there for at least five or ten minutes. It's just Ben Affleck.
Labels: Film shoots Good Will Hunting Hell's Kitchen Law and Order Movies TV Upper Eastside