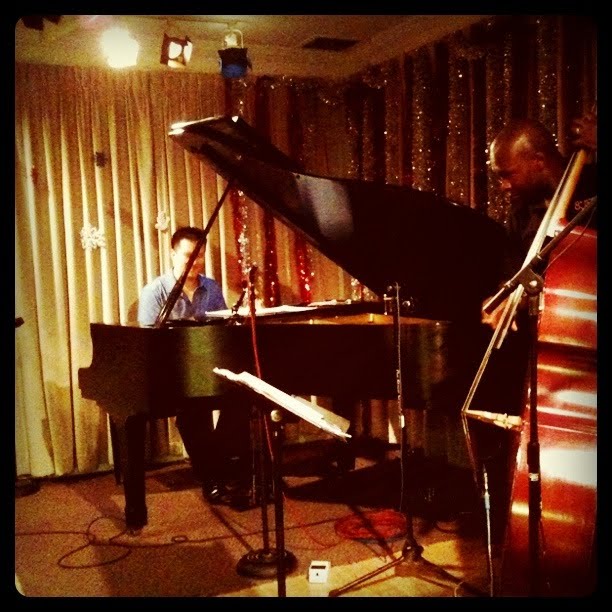 Before fatherhood changed everything, Carol and I frequently checked out Victor Lin's jazz concerts. This past Friday, I finally got to hear him play again after more than a year. It felt like home hearing his trio again. Victor loves working in threes, often changing his trio lineup, but always going back to work with past collaborators.

The show was at Cobi's Place, which also had something to do with the homey feelings that were flowing freely in the air. It's a jazz nook, but it feels more like someone's basement where a nine-year old is clawing his way through one of Bach's Minuets. That's not a slight on Cobi's Place. That's exactly what they're going for here. There are Christmas decorations hanging in July, and there are free macaroons and cake after the show. But let's get to the music.

Joined by Michael Olatuja on bass and Jordan Perlson on drums, Victor experimented, tested new material, connected with his audience, and mostly made love to his piano (I had to look away a few times). The trio explored Gershwin, opening with "How About You," and then slowed it down for the standard, "You Don't Know Me". The music took some pretty crazy turns too. Fresh off teaching at a string camp in Florida, Victor captured the fiddling spirit in jazz trio format on "Wheelhaus." One of the show's strong points was its organic feel. The guys just went for it, even pulling together a song that Victor wrote half an hour before the show started.