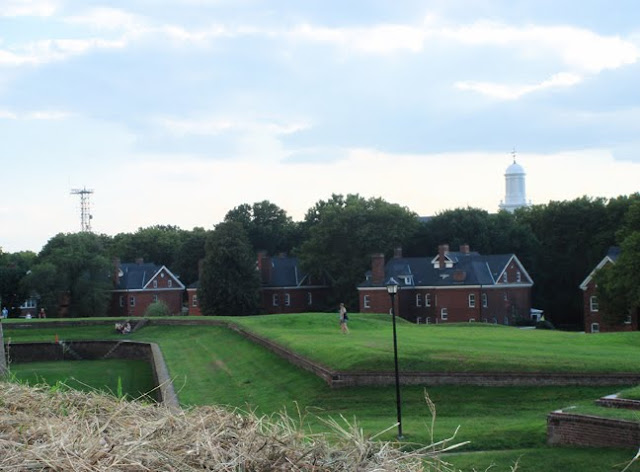 One of the things I love about the city is the opportunity it affords for constantly discovering new places. Today both Carol and I wandered Governor's Island for the first time. It's a former military base, and there are remnants of that - cannons, barracks, even a fortress. In 2003 the federal government sold the island to the people of New York for a buck. Six years later, we finally claimed our share of the buck. We took the free ferry ride out to the island to picnic, check out the art shows, and explore. Several parts of the island do have a military feel. But I was pleasantly surprised to see that some areas also had a college campus aura - especially Nolan Park. One of my favorite parts of our afternoon trip was a photo exhibit which captured everyday life scenes on the island back when the Coast Guard used it as a residential community and operations base. There were beautiful snapshots of a bowling alley, movie theater, even a Burger King - blurring the line between military and civilian life.
Labels: Day trips Governor's Island U.S. military

Cliff said…
The great thing you do is to truly experience your city. Think of how many people live their entire lives in New York and never think of going to see some of the places you have been. It's funny how we can sometimes take the gifts of our own enviroment for granted.
September 7, 2009 at 8:59 PM

daveed said…
I've been wanting to go there for a while. My grandfather worked there for a bit when he was in the Merchant Marines.
September 8, 2009 at 3:51 PM