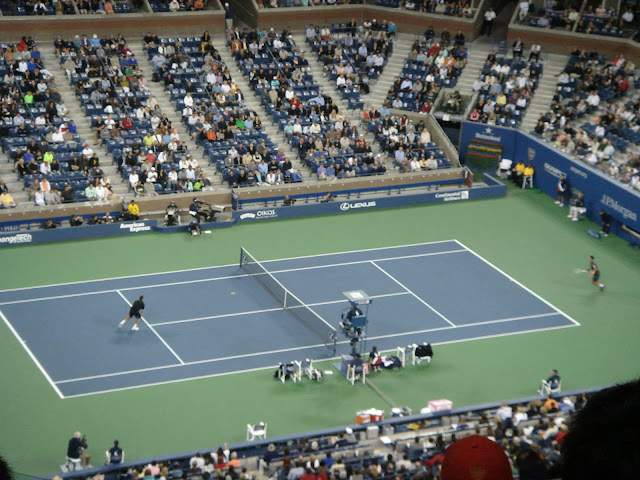 Carol and I went on our annual pilgrimage to Flushing Meadows last night.

There's something special about watching a marquee match up under the lights at Arthur Ashe Stadium. The evening matches seem to ooze of drama and "moments", like when Djokovic was hitting with John McEnroe after his match against Stepanek.

But some of my favorite times at the Open are the early round day sessions, where you get to hop around from match to match - watching top players go at it in the more intimate Louis Armstrong Stadium and Grandstand, and witnessing up-and-comers slugging it out on the outer courts from literally ten feet away.

I remember one summer day several years ago, I was at the Open for over twelve hours straight. I had a day session pass, but when my friends left, I decided to stick around and see if I could get into the night session. It worked. But I can't for the life of me remember how I did it. It was a euphoric day. I roamed the outer courts all day and all night, occasionally paying homage to the Goliaths inside Arthur Ashe and the mini Goliaths at the Grandstand. For the first time, I saw Federer hit. It was on the outer courts. Back then, he was seeded like 17 or 19, and hadn't yet earned the respect he now gets from opponents, the tennis world, and sports fans in general.

The thing about the outer courts is that you're so close to the players, you can almost visualize what's going on inside their heads. This year, I wonder what went through Roddick's head when he bowed out in the third round, or Andy Murray when he got destroyed in the fourth round. Humbling moments indeed. I also wonder how many times exactly has Melanie Oudin pinched herself in the past week.
Labels: Tennis U.S. Open