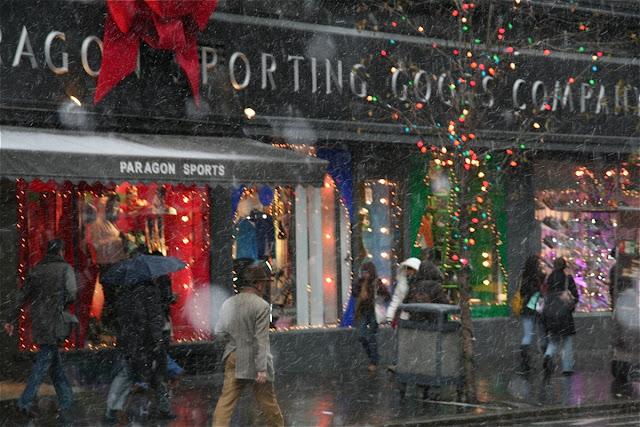 Today I kinda flipped out at Paragon Sports on Broadway at 18th St. Good place to find ski gear, not-so-good place to flip out. But that's more or less what happened. My wife has been spending a lot of time these past couple of weeks looking for a new ski jacket for me. For some reason, it hasn't been easy at all. She's been looking online, and we've been going to stores too. That coupled with the Christmas shopping in December and I was really getting sick of shopping. Some guys don't mind shopping, some actually like it. I detest it. If I know what I need or want, I go in, get it and leave. So when finding a particular item is long and drawn out, I'm prone to pissed-offness. But what really caused me to flip out was Gaza. Let me explain. I was reading the news earlier before we left for Paragon. Granted, there's a week-long truce between Israel and Hamas. Still, that doesn't take away the fact that over a thousand people died in the recent Gaza attacks. On the subway ride down to Union Square, I couldn't stop thinking, I should've been praying for Israel and Hamas more. It's the least I can do. Instead, I'm going shopping. I have become comfortably numb. And it pissed me off. I was disgusted with myself, and I unleashed that anger on my wife. We were mad at each other. But we weren't in disagreement, because I think we both agreed that it's easy to get comfortable and self-absorbed, and we both want to pray more for a world that has gone to crap in so many ways and in so many places.

I also concluded that it's okay to be angry about things that are going on in the world. If we're not angered by things, then maybe something's wrong with us. But I need to be careful how I express that anger with my wife and others. Getting issues out in the open is a good thing. But perhaps flipping out in Paragon Sports on a lovely Sunday afternoon is not the best method.
Labels: Carol Gaza Paragon Sports Prayer Union Square