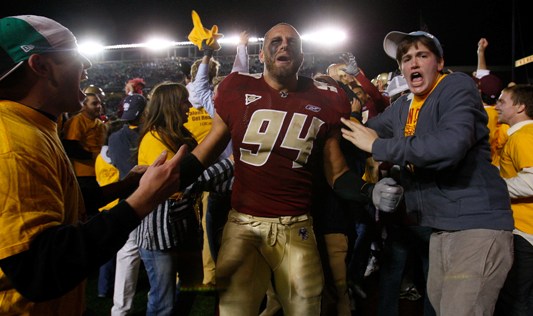 I root proudly for Boston College football. Mostly because BC is my alma mater. But also because they're overlooked by the AP and college football fans year after year. BC doesn't get the big-name recruits, but it has regular success in finding diamonds in the rough and getting the most out of its players. I like rooting for the underdog. And with BC, I root with a major chip on my shoulder.

This season, I didn't know what to expect. I knew our defense would be strong, and we were in the nation's top ten in total defense throughout the season. But how would our offense look after losing Matt Ryan to the NFL? Not so good unfortunately. Still it was enough to get us to the ACC Championship game after winning out the last 4 games of the regular season. At that point, our goal was to win our first conference championship and get to our first BCS Bowl: the Orange Bowl. Instead, we got our butts whooped by Virginia Tech, the team that beat us in last year's ACC Championship game. No championship. No Orange Bowl. The chip on my shoulder grows bigger.

As expected, instead of being selected to the 2nd or 3rd-best bowls for an ACC team (the Peach Bowl and Gator Bowl respectively), BC was selected to play in the 5th best bowl, the Gaylord Hotels Music City Bowl. Yes, the name says it all. Our small alumni base makes for a bad traveling fan base, and bowl organizers want to sell tickets. My wife is tired of me pointing this out. But when you have a chip on your shoulder, you have to explain things to people.

Even with the bowl shaft, BC still had goals in mind. Beat Vanderbilt, and we accomplish 3 things: 1) extend our 8-bowl game win streak (the longest in the nation), 2) finish the season with 10 wins (for the 3rd year in a row), and 3) finish the season in the top 25. A win was a must. On New Year's Eve, Vandy didn't beat us. Unfortunately, we beat ourselves. With stupid penalties, bad decisions, turnovers and a serious lack of offense. The chip is now the size of shoulder pads.

So how do you stay positive about BC football after losing to a team that we should've beaten handedly? I take a little comfort in Matt Ryan. He's no longer in pads at Chestnut Hill, but he's as good an ambassador for BC football as Doug Flutie right now. This week he was named NFL Offensive Rookie of the Year and he brought the Atlanta Falcons to the playoffs after a dismal season the year before. Stuff like that makes me proud to be a BC Eagle and momentarily forget about the Gaylord Hotels Music City Bowl. Man, what a horrible name.
Labels: Boston College Carol College football Matt Ryan