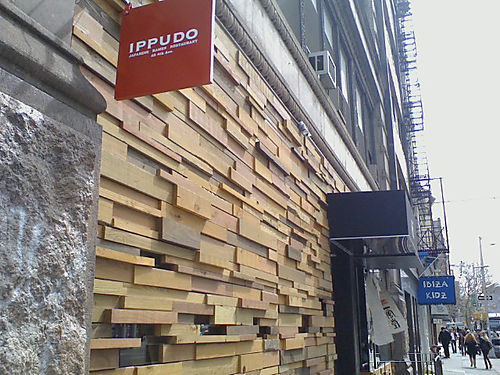 I was at Ippudo earlier tonight in the East Village in search of tasty ramen noodles. Just as I was noticing it was taking an unusually long time for our noodles to arrive, a waitress came by to apologize to my friend and I about the delay. There was some kind of holdup with one of the ingredients in my dish. But she brought over some complimentary edamame. And that made everything fine in my book.

Not even two minutes later, a woman who appeared to be a manager of some sort came by also to apologize for the wait. She brought us two free appetizers: Japanese fried chicken drizzled with a honey-mustard type sauce and these awesome skinny peppers with a salt-lime seasoning dip. My friend and I were blown away by the unusually kind service.

After that, two more employees came over to apologize and say that the food will be here soon. Amazing. This restaurant takes its work seriously and treats its customers right. Their customers were so important to them that four separate restaurant employees came to apologize to us. That meant a lot to me. I get frustrated when people don't acknowledge when they're wrong, when they don't apologize for stuff they should. To me, it only makes matters worse. But when you show some respect and humility by apologizing, you've totally earned my respect. I waited a long time for that ramen. But I will definitely be back.
Labels: East Village Eateries Ippudo Ramen