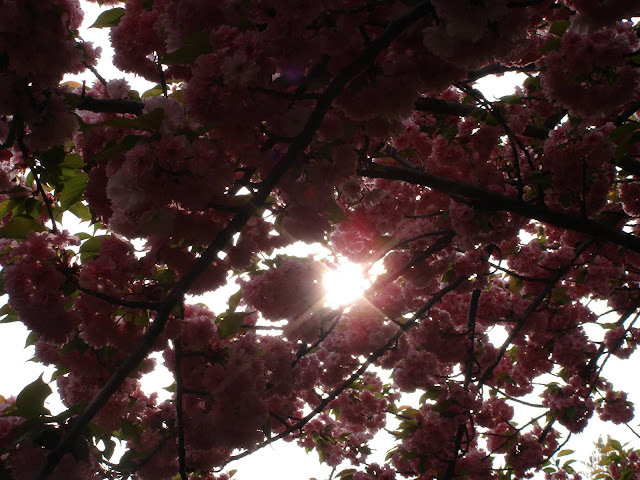 Yesterday, Carol and I checked out the Brooklyn Botanical Garden's Sakura Matsuri, the weekend-long Cherry Blossom festival a.k.a. freak show with flowers. The cherry blossoms themselves are definitely a sight. But I think the dress of the festival attendees stole the show. I didn't realize until later that there were costume contests and photo contests going on. At first, I just thought people were dressing up for fun. I don't know much about Japanese culture, but I think there were some Anime or Manga character costumes. Bright-colored wigs, people carrying fake oversized swords, outrageous outfits, that sort of thing. But I was confused by some of the other costumes. There were several people dressed in goth garb. Like I said, I don't know much about Japanese culture, so maybe I'm missing something. And there were also tons of girls wearing chi pao dresses. Hello, wrong culture. This isn't Chinese New Year. I agree with my wife that seeing the Cherry Blossoms on a weekday is better in some ways because it's far less crowded. But then you miss out on the weekend freak show that is Sakura Matsuri.

One of my all-time favorite costumes was a guy who went as Dr. Greene at a Halloween party at a Soho loft over ten years ago. I seriously thought the guy was actually Anthony Edwards. I never got into costume-wearing myself, but I think it's fun to see other people dress up. I guess a lot of people think it's fun living inside someone else's skin even for just a few hours.
Labels: Anime Brooklyn Brooklyn Botanical Garden Carol Goths Halloween Manga Sakura Matsuri Soho

carollai said…
haha. of all the things to comment abt in a beautiful place with lovely cherry blossoms....