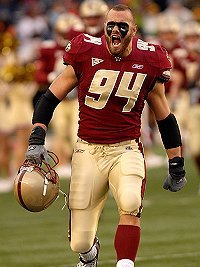 Last week, BC's star linebacker Mark Herzlich announced that he was battling cancer. He received medical attention for some leg pain he was feeling. It was later determined that he had Ewing's Sarcoma, a malignant tumor usually found in your bones or soft tissue. Such a shock to his family, friends, team, and the BC community. This past season Herzlich was named ACC Defensive Player of the Year. In 2010 he's projected to be a top ten pick in the NFL draft. None of these things matter right now. It's times like these that we realize how temporary - even meaningless - earthly accolades can be. Herzlich is a fighter. We've seen it countless times on the field. Now Mark Sandon Herzlich takes on chemo. BC fans, keep him in your prayers.
Labels: Boston College Cancer College football Mark Herzlich Prayer