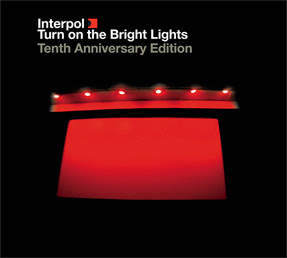 One of New York's quintessential bands - Interpol - is releasing the 10th Anniversary Edition of their debut album, Turn on the Bright Lights, on November 19th. The original tracks have been remastered, but what's most enticing for fans are the bonus tracks. There are 17 of them in total, comprised of mostly demos. (Here's the entire track listing).

The re-release seems like a good time to look back at what this album stood for and what made it so special. Turn on the Bright Lights, in my opinion, is still Interpol's best work from beginning to end. There's a reason why nearly a third of Interpol's shows are dedicated to songs from this album. TOTBL is all about rich textures and rhythms, and it delivers an immense wall of sound for listeners.

My favorite track off TOTBL is "Leif Erickson" and it's probably my favorite Interpol song of all time.