WOULD THE 2012 OLYMPICS HAVE BEEN GOOD IN NYC? 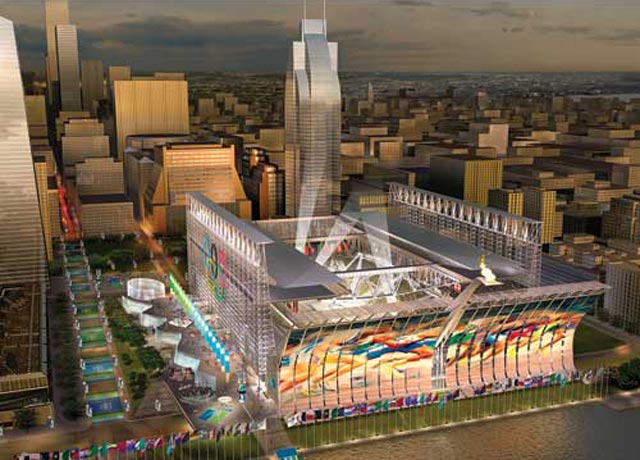 It doesn't seem that long ago when New York City was a bid city for the 2012 Olympics. In 2005, I was working at an ad agency that was tasked with creating special promotional materials for the International Olympic Committee. The project felt monumental. New York City has never been a host city for the Olympics. So in a sense, we had a chance to make history.

What I find most striking when I look back at the bid is how quickly the city seemed to change its attitude after we lost to London. It was kinda like a boy saying "I didn't like you anyway" after getting rejected by a girl.

Naturally, there was a lot of buzz going on around the bid. At the center of it was the proposed stadium on the Westside (see the rendering above) by the rail yard. Many were concerned about the traffic which would continue to torment Jets fans long after the closing ceremonies. The stadium became a point of controversy.

But the NYC bid had some features that garnered universal appeal. For instance, the athletes would walk down Broadway on their way to entering the stadium for the opening ceremonies. The parks and recreational facilities would undergo the biggest investment the city has ever seen. And each borough would be designated one of the the five Olympic colors. For the city, the economic impact was projected at $12 billion, and the creation of hundreds of thousands of jobs were predicted.

Despite all these pluses, Mayor Bloomberg and several planners - after we lost to London - have said that the Olympics wouldn't have been good for New York. Some planners believe the city would have been stuck with a bill that would be over by billions. Also, despite not having the Olympics here, real estate development in Hudson Yards has still been strong anyways. There's a sentiment that we didn't need an Olympics to spur development in this city.

As a resident, I would've wanted the Olympics to come to New York. The traffic and crowds would have been insane. But being the host city for the Olympics would have made for one historical summer. Sports facilities would have undergone some pretty awesome renovations to the benefit of both athletes and spectators. Businesses would've reaped gigantic profits. And we'd get to see beach volleyball in Williamsburg. It would've been worth it.