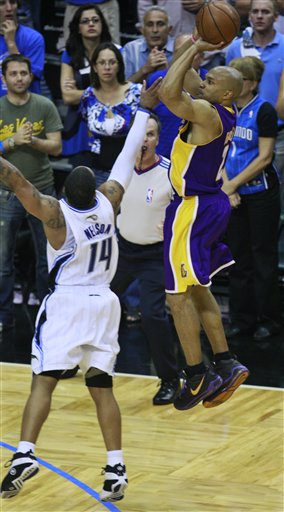 I wish the Knicks had a player like Derek Fisher. It's hard not to love his attitude, cool demeanor and ability to nail shots like this. In so many frustrating games last season, we let our lead slip away. Having a guy like Fisher would give us a better chance to close out games. In the meantime, I'm hoping Stephen Curry is still available at the eighth pick of the draft. That guy can shoot and he nearly carried his team singlehandedly all the way to the final four in 2008. But supposedly the Knicks are saying, if given the option, they would choose big man Jordan Hill from Arizona over Curry. At least our history with drafting big men has gotten better over the years: Wilson Chandler and David Lee vs. Frederic Weis and John Wallace.
Labels: Basketball Derek Fisher New York Knicks Stephen Curry